The research of French-Iranian artist Sépànd Danesh centers around a world replenished by silence and where each gesture is open to interpretation. Each work reveals the evidence of a loneliness determined by the artist’s own history – his family fled Iran after many years of war – and by his encounter, as a child, with a foreign culture and language (French) that he had to learn through books.

In his paintings, the corner has become the main subject: the traditional image of a zone used to punish children, made to stand facing the corner, is here a place, imposed or not, to withdraw and commune with oneself. A few, carefully chosen iconographic elements fill out these vertical spaces and hence suggest a different interpretation for each work.

Since the beginning of the French phase of his childhood, Danesh has also been copying by hand works by great writers, such as Marcel Proust. The slow and thoughtful gesture this involves acknowledges the idea of a new language that must be learned in a set and strict manner. 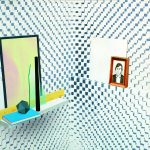 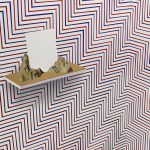